Taking influence away from the Influencers

The idea for this article came from a few different places. At the heart of it, was a contradiction that wasn’t sitting very well with us.

On one hand, Influencer Marketing is facing a rising tide of criticism, with many complaining about the lack of effectiveness, transparency and ultimately, real value.

Then, on the other hand, we’ve got what we see in our work and what seems self-evident from our everyday lives. We make decisions based on what we read, watch and discuss on the internet and social media. We are being inspired and influenced.

The central problem here is the risk of waste and distraction, caused by all this confusion. It’s hard to know where to invest your time and money.

We had an idea this morning which, we think, sheds a bit of light on it all.

Back to the beginning

In basic terms, we’re influenced by two types of people:

Of course, there’s overlap, but the broad principles are useful to help develop this idea (I’m influenced by Jamie Oliver – I got to hear about him through TV, but it’s his recipes that I’m interested in and inspired by).

There’s also the recent phenomena where people like us become so successful in attracting attention that they become people we want to be like. They’ve become “Influencers’, with a capital I.

Influence with a capital I

Talk of influence has been taken over by talk about Influencers and Influencer Marketing.

The name is new but the principles are familiar. What started as influential, trusted voices for niche audiences (people like us) has morphed through the pull of big audience and big money towards the traditional advertising model (showing us people we want to be, hawking products they want us to buy).

But, the tide is turning.

Then Mark Riston joyfully deployed his ‘three circles of bullshit’ to show the actual reach ‘Influencer’ messages have – in terms of click-through rates. The short answer, not a lot.

What can we make of Influencer Marketing in this light? When we take into account fake audiences, a lack of trust and their actual power to alter behaviour we have a more realistic assessment

Here’s Mark Ritson, looking back on a panel debate with Facebook’s head of agencies in Asia Pacific, Neil Stewart.

“There are plenty of influencers who have friends, followers; they have a blog and people who see their content. But until you can prove that they have influenced – so changed behaviour, an attitude or an action – I think we could almost sue them for using a false or misleading description.”

Challenged by the moderator of the session (herself an influencer of some note) to provide a replacement term, Stewart suggested, without even a pause, “Z-list celebrities”.

What’s more, in a world where brand purpose matters more than ever, is there a disconnect when it comes to the use of influencers who’s purpose may be purely commercial?

Influence has become a service and in doing so has diminished its power. We pay for, and so encourage reach, but this comes at the cost of real, genuine influence.

Influence with a little i

In response, we’re starting to see some new tools and tactics emerge. One of which is what the New York Times calls nano-influencers – brands targeting those with followers in the thousands not the hundreds of thousands. The argument here is that this group is more willing, more malleable, and more believable. They’ve not sold out, yet. They’re still people like us.

Another example is apps like Masse that promise to “harness the value of word of mouth” rather than rely on dubious sponsored content. Here the model for recommendation is driven by the love of the product rather than the rewards of sponsorship.

So far, so marketing, but Insight and Research teams have a valuable role to play.

Understanding what’s shaping and influencing your audience has long sat with insight. We have a range of other tools to help us understand cultural influences and campaign tracking to test ad effectiveness. It’s time to get to grips with how influence plays out on social.

This is where our two-People model comes back in.

So, how do we find them?

Where to start: cutting through the noise

We’ve found it useful to evaluate potentially interesting authors/influencers (with a small i) by asking two questions:

You can then identify and rank potentials and map them onto a 2×2 like this: 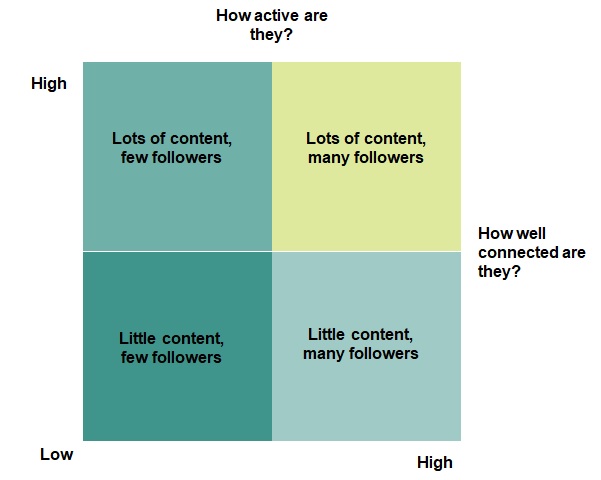 This makes it easy to find your ‘golden’ quadrant – those people who are the most active (creating lots of content) and who have the right level of connectivity.

What next? Well, you’ve just found a group of people who care as much about the world you work in as you do – probably more. Of course, you can approach them to sponsor your content, but there’s so much more potential for creating new audience insights.

Using a social insight approach, people in the golden quadrant can help keep you informed and relevant.

We help brands map out and understand the role of influence (with a small i). Drop us a line if you’d like to find out more.

We are the Social Insights agency.

We make social data simple. Simple for you to know what’s meaningful, to find new insights, to see opportunities and to spark inspiration.

We’ll help you use social to find and understand the people that matter to you. So you can create the right experiences, engage new audiences and appeal to people in the best way.

People are busy, we’ll help you become something they want to be part of.