Have you met Justin?

He started broadcasting himself gaming back in 2006 on Justin.tv. Things have changed a lot since.

Users flock to it for a variety of reasons, including:

But at the moment, it’s too nebulous for research. Its lack of transparency and multi-sensory content make it challenging to systematically and comprehensively analyse. In other words, it’s not the right place for conducting quality market research just yet.

But it’s an important place for marketers. With so much opportunity to reach an enormous audience, Twitch remains an underappreciated marketing tool.

That’s why we’ve compiled a comprehensive guide to all things Twitch. We’ll help you understand what it is, why it works, the dynamics of creator-viewer interaction and how companies are getting involved. So, brands can go forth, knowing how they can better engage and reach their audience on this vast platform.

What exactly is Twitch?

At its core, Twitch is a social media entertainment platform.

It revolves around watching, interacting with and creating digital video broadcasts, with viewers and content creators interacting closely and spontaneously over live streams.

Here is a taster of what it can look like in action:

The platform is highly interactive 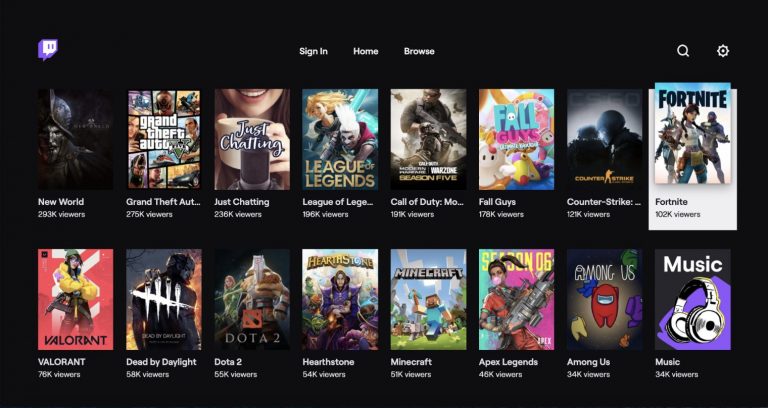 What can you watch on Twitch?

Twitch originally focused almost entirely on video games but more recently expanded to include nearly everything, from cooking, music, Q&A sessions, and — the leading driver of traffic — video games With its rising popularity, many other content categories have appeared and gained huge numbers of viewers.

The most popular category is Just Chatting, followed by gaming.

So, however small your niche, there’s likely a community on Twitch ready to be engaged with or examined for consumer insight. 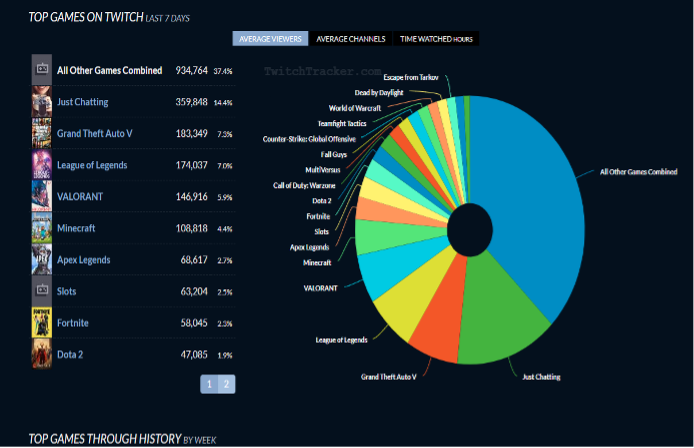 And what about the personalities on the platform?

Twitch has thousands of broadcasters, who viewers become intimately connected with. Most of the top Twitch streamers stream for many hours a day, which exposes their private life to the public. Their viewers end up getting a view into their favourite streamer’s life that is usually reserved for a person’s family and closest friends.

Here are the top 10 broadcasters on Twitch, according to their follower count on Twitch Metrics.

Who is using Twitch?

Here is what we know about the user profile on Twitch:

Some streamers on Twitch approach it as a hobby. For others, it’s a profession, and they try to monetise their activity by streaming frequent and long sessions.

So, how do they make money on Twitch? 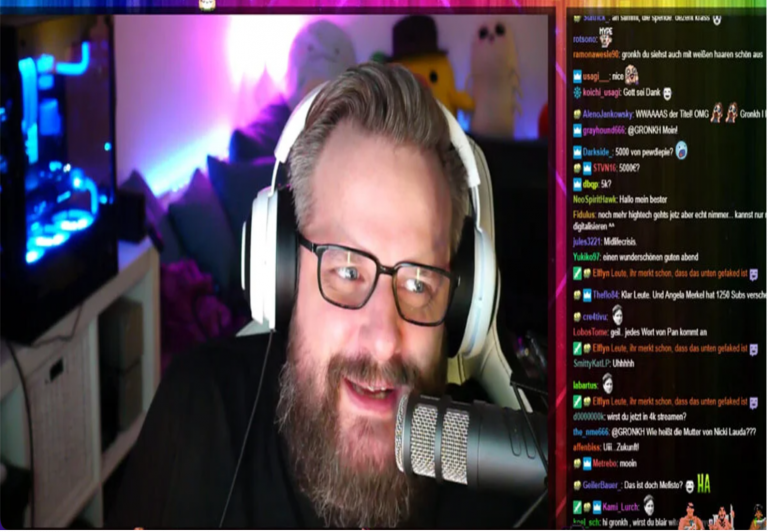 Viewers on Twitch can participate in the streaming experience in many ways, creating a collaborative and communal experience. The audience can influence what happens during the stream through polls, votes, questions and the chat.

Some watchers send messages in active chat sessions. Others don’t write anything, preferring to watch or listen passively.

Streamers sometimes respond to their feedback and comments. They also do their best to trigger conversations with viewers during the stream. Twitch provides streamers with info about how to make the chatbox more lively and make more money – and some are clearly are building on this.

Here is some common Twitter etiquette that we see on the platform, which has developed its own norms and ways of behaviour. 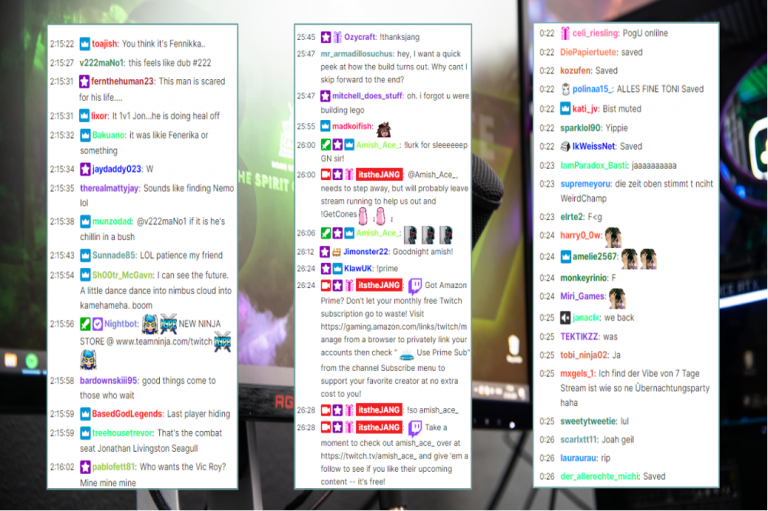 A case study:  the Jerma985 Dollhouse

The Jerma985 Dollhouse stream redefined what it means to host an interactive live stream by recreating a real-life The Sims game. With a fully built-out set and live production, viewers of the stream could control the actions of Jerma, a popular Twitch personality, for several hours over 3 days. 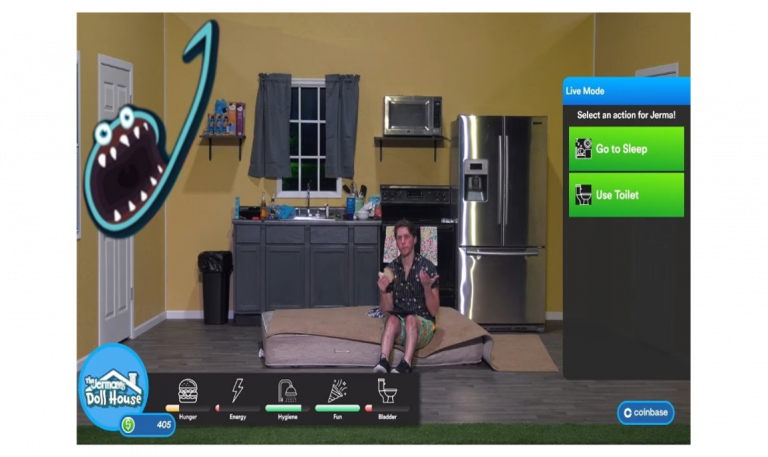 Votes determined what Jerma did next – whether that was sleeping, eating or using the bathroom. Meanwhile, a storyline slowly unfolded as different characters emerged and caused havoc.

Jerma’s Dollhouse stream reached over 600,000 viewers in just the first 3 hours, with thousands more tuning in for the next 2 days. 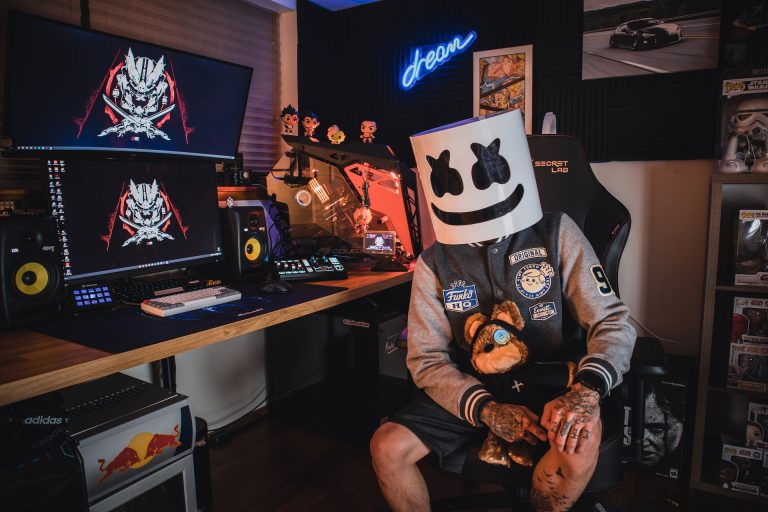 How to market on Twitch

Marketing on Twitch is in its early stages, but that doesn’t mean that brands haven’t already started jumping on the channel to raise awareness for their business.

There are 3 key ways for brands to market on the platform:

Twitch is home to thousands of live streamers, including some who have racked up millions of dedicated followers. This makes Twitch the perfect place for influencer marketing or partnerships. Brands can reach out to high-performing streamers and ask about collaborations. Typically, a creator will promote the brand on a live stream to their audience.

Twitch users generally don’t want to be advertised to directly. Instead, they’ll accept products referrals from their favourite streamers because it feels personal and they have developed trust over time. To reach users on a personal level and engender trust in your brand, you must commit to being an active member of the community.

Brands can run two types of ads on Twitch: banners and in-video ads to help increase brand awareness. Video ads on Twitch can only be shown on specific Twitch channels, and the streamer must be a Twitch Partner to enable them to run ads on their channel. Ads can be shown before the stream kicks off, during the middle of the broadcast, or at the end of the streaming.

Creating your own branded channel on Twitch is another excellent way to increase brand exposure and awareness. Use your branded channel to host weekly live streams with your customers (or potential customers) or host exclusive events for followers to tune in to. 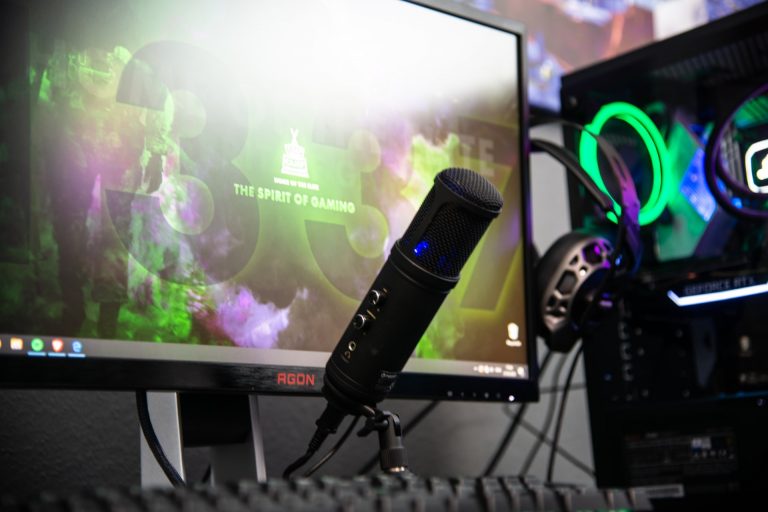 How brands are marketing on Twitch

To advertise their chicken wings, American fast-food giant KFC partnered with Twitch streamer DrLupo to play PlayerUnknown’s Battlegrounds. This was primarily because of the game includes the victory sign of “Winner Winner Chicken Dinner” for taking first place. So, in the live stream, whenever DrLupo won a match, the audience members would type ‘winner winner’ in the chat, which would turn into a special KFC bucket emoji, for a chance to win a KFC dinner in the form of $5 gift cards.

What we love about this is that KFC took time to understand the community. You can see this in how they designed a campaign that fitted seamlessly into the community and activated latent behaviours. 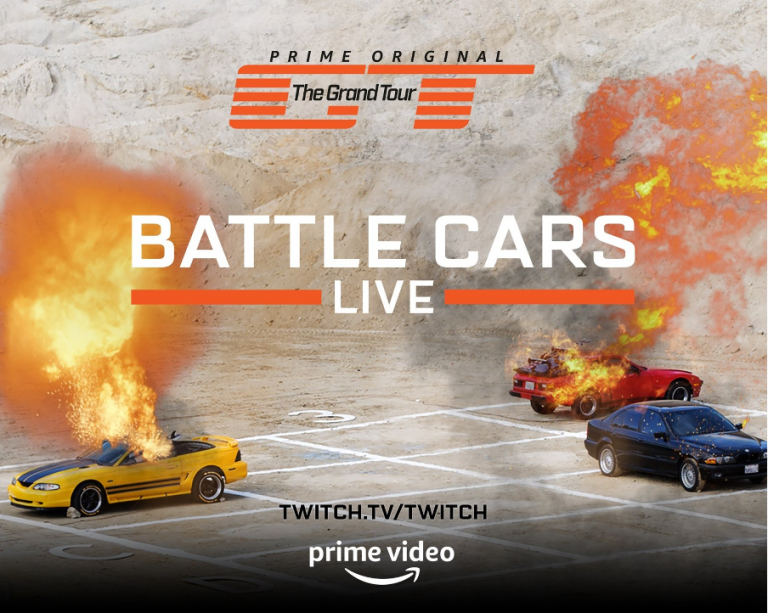 To promote the upcoming premiere of its new series on Amazon Prime Video, “The Grand Tour” set up live stream event to help create hype and garner attention for the show. It team partnered with Twitch to host Battle Cars, a live experience of the classic game, “Battleship.” However, instead of battleships, there were real cars on a grid, and viewers got to vote on which squares to “hit,”. If it was correct, the car exploded. The event was a huge success with over 50,000 viewers tuning in the first 2 hours, and a total of 3.3 million viewers throughout the entire stream.

The luxury car maker teamed up with the popular gaming streamer Fuslie in an “All In” Twitch campaign. More than 23,000 users voted on modifications and customizations to the 2021 Lexus IS sedan. The new model ended up as the ultimate gaming vehicle, with gaming consoles and a 3D-printed controller installed inside the car. 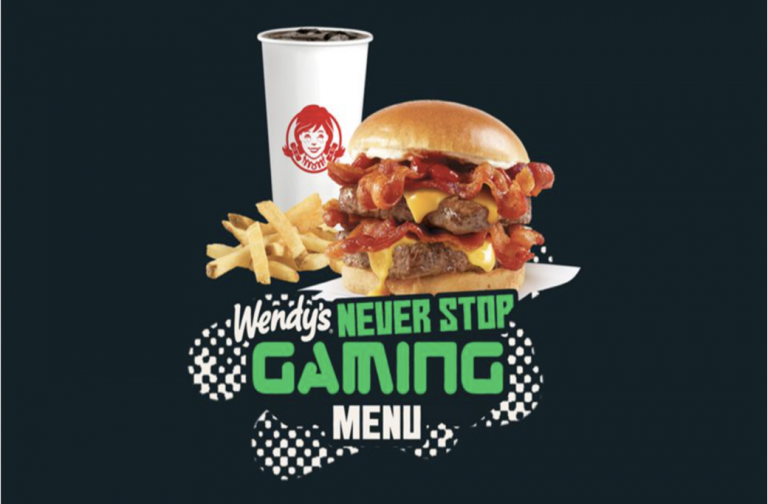 Wendy’s is an American fast-food chain that broke the norm and created an official company channel on Twitch. They conducted weekly streams of popular games as part of their ‘never stop gaming’ campaign. Wendy’s Twitch account accumulated 115,000 followers and 10,000 to 50,000 views before the channel soon fell out of use. The company stopped engaging with the community after the initial promotion, showing how essential it is that brands maintain their Twitch presence after a campaign has ended. 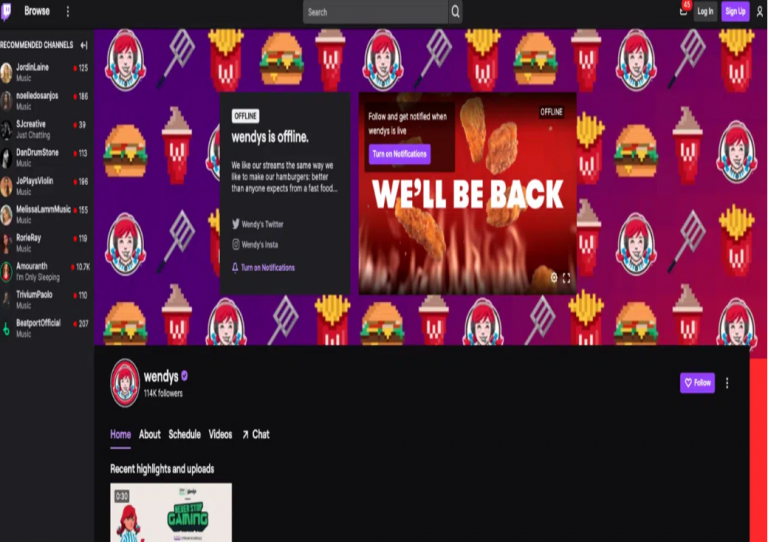 Here are some useful links to help you get to know Twitch:

Tool featured in Techcrunch. It reads the game UI to detect events (such as kills or deaths) in gameplay video and generates highlight clips or compilations automatically.

Streamers tend to use 3rd party clients that help them filter into only the types of comments they are interested in. This is an example. 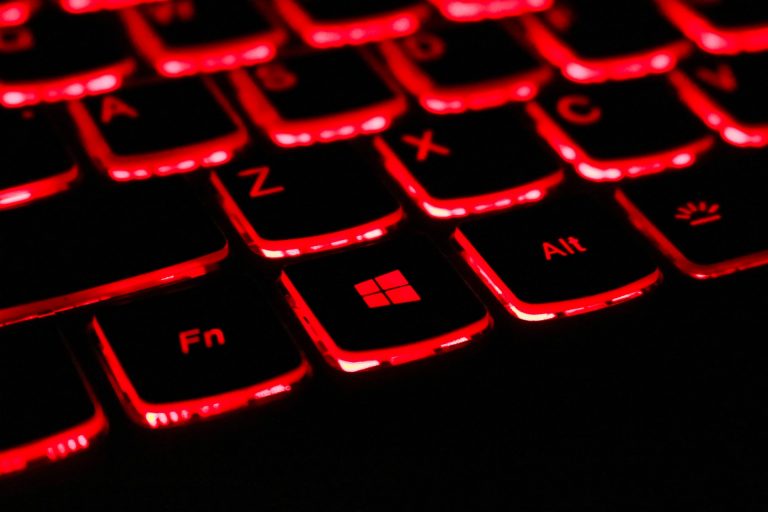 So as we’ve seen, Twitch represents a growing opportunity for brands.

It’s a great platform to create a community, represent your brand in a younger, fresher light, and create the opportunity for your brand to be a game-changer in the social media landscape.

So if you’re looking for innovation, it’s here.

Will you be an early adopter?

By Stella Martorana and Louise Alestam